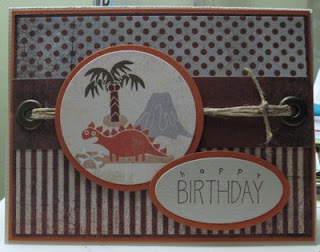 You're prehistoric! LOL. That will not be what I will say when I give Todd this card for his 40th birthday, which is tomorrow. He has had a thing for dinosaurs ever since he was little, so I of course had to purchase some of the Basic Grey Archaic papers when they came out. They seemed like the perfect choice for Todd's birthday card.

This card was also done for the featured stamper challenge. Today's stamper is Kendra, who has an enormous and lovely gallery. I picked this card but made some changes to it. I used eyelets instead of buttons, changed the focal shape, and added a sentiment oval.

Instead of stamping dinosaurs, I took the dino printed paper and used Nestabilities to cut out one of the images. They are so fun that I wanted to let this little guy show himself off! I stamped a sentiment from A Muse on a coordinating neutral from Bazzill and cut that out with Nesties as well, and then I used some Bazzill orange cardstock for layering. The underneath layer is made of three other papers from the Archaic collection. I mounted all the layers to an orange panel and then added jumbo antique brass eyelets with my Crop-a-dile and tied hemp twine between them. A few dimensionals for the shapes and a matching neutral card base and we're all set.

We had Todd's birthday party last evening - we had six people (three from the lab, three from MIT days) and a lovely time. Todd enjoyed his Mexican food, we had a great evening visiting, and the kids loved having some new people to show off for. Tomorrow may not be as celebratory since I'll be at the preschool fair for about nine hours... but I promised that I would make the decadent peanut butter and chocolate cake that I make for him every year, so we will at least have that!
Posted by Lori Rider at 9:19 AM

Oh Man! You are really cutting him down to size with this one!
I don't own this set---but I did just sell it to one of my club members. She loves it!
Great job Lori, Nola