Black (and Red) Velvet (or Suede)

The month is just flying by - I can't believe it's time for my fourth OCC challenge. (I'm lucky enough to get five Saturdays so you aren't done with me yet!) This week we are honoring Halloween with a special challenge. I had to put a twist on it, of course - so my challenge is to make a card or project that's inspired by a scary book or movie. As you'll see from my sample, it's OK if your creation isn't Halloween related.

I had a little help from Todd on this one, seeing that Halloween is his favorite holiday and he loves all things related to Halloween and mad scientists and nineteenth-century British literature... but I digress... I am really not a fan of spooky stuff, but I still thought this would be a cool challenge. The first thing that came to my mind was the story by Edgar Allen Poe called "The Masque of the Red Death." The story progresses through a series of seven apartments, the last of which is the most important to the story, and it's described in this way:

The seventh apartment was closely shrouded in black velvet tapestries that hung all over the ceiling and down the walls, falling in heavy folds upon a carpet of the same material and hue. But in this chamber only, the color of the windows failed to correspond with the decorations. The panes here were scarlet -- a deep blood color.

That description is what inspired my card. Well, that, and a card I made in My Digital Studio while I was working on my certification this week. I actually made that card before I made this one, but I kept returning to that idea as I was thinking about this challenge and ended up with some of the same elements. I'll show that card a little later in the post. Now back to the challenge... 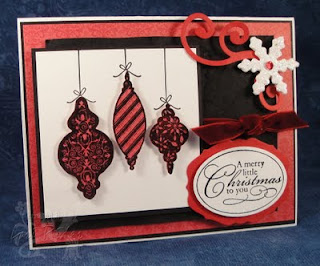 I started my card with the red damask print from the Christmas Cocoa specialty paper in the mini catalog. I used it as the background and also stamped the ornaments from Tree Trimmings onto the paper with black craft ink and embossed with clear EP. After I cut the ornaments out, I adhered them to whisper white cardstock with dimensionals and added the hanging strings.

Black velvet cardstock would have been really cool on this card, but since I didn't have any, I made some faux suede cardstock instead. (This was the technique challenge on SCS a couple weeks ago.) I did have some red velvet ribbon that's been in my stash for a while. The sentiment (from Christmas Punch) was also embossed and then layered on a die-cut from Lots of Tags, which I saw on this lovely card from Andrea Walford. My final touches are a wooden glittery snowflake that came in a pack I picked up on clearance last year at Cost Plus World Market. I thought they might come in handy someday! I added a Stampendous sticker to the center of the snowflake and used the Scribbles Swirl die to further embellish it.

So there you have it - my Poe-inspired Christmas card! How's that for crazy? ;) I hope you'll take on this challenge - have fun with it and just go wherever it takes you! And be sure you stop by the OCC to check out the samples from the rest of our awesome team! 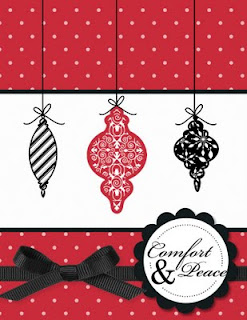 Now, if you're still with me, here's the card I created in MDS. I used the same colors and the same Tree Trimmings ornaments. The sentiment is from the "stamp" set Wishes & Greetings (these are actually rub-ons in the catalog) and the rest should be pretty self-explanatory! I'm having a lot of fun learning more about this program as I go through certification. I even sent this card off to be printed, and I'll be so excited to get some copies of it to mail off this Christmas!
Posted by Lori Rider at 5:00 AM

Labels: Christmas, My Digital Studio, Our Creative Corner, Stampin' Up

Both cards are lovely, Lori!

Your card is super! I tried to guess which movie or book but I just couldn't! Great job!
CindyB

This is stunning...at first I didn't think you played... until I read your post!!! What a wonderful hommage to Poe!!!

These are so beauuuuuutiful! What a gorgeous take on those stamps and paper!!

Beautiful cards.....and my favorite color combinations, Lori! Masque of the Red Death has always been one of my fav stories......WOW! Great choice.

Both are beautiful cards, Lori! Thanks for the challenge.

Both cards are fabulous Lori! What a fun color combination for the holidays and those ornaments hanging are beautiful!

Have a fun weekend, Jennifer :)

Absolutely brilliant take on this great challenge, Lori!! Your card is beautiful -love those ornaments.

Wow, this card is just gorgeous. Love the ornaments and what a fantastic take on the challenge! Well done!