For my not-so-little little boy

This week Ben turns 6! I can't even believe it. He's getting so big - literally, he's seeming much taller to me lately, and he's reading really well and doing great in school... he's just growing up. Sniff! I hope he's still little enough that I could make him a little-boy card for his birthday. 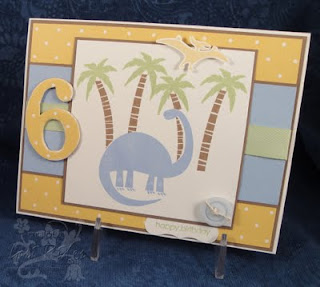 I was browsing the Oliebollen site (today's source for the SCS inspiration challenge) and looking for something that would work on Ben's card. I came across these dinosaurs and decided they would be perfect. I still have my retired Prehistoric Pals set - with lots of dinosaur lovers in my house I probably will never be able to part with them! Based on the colors on the Gund dinos, I picked bashful blue, certainly celery, so saffron and close to cocoa. I used a sketch challenge, and it's my first time playing along with the ladies at Stamping 411. I turned it into a horizontal card because that just worked better with my fairly large image.

I started off by stamping the brontosaurus in bashful blue and then masking him off to stamp the palm trees. I added the pterodactyl later with dimensionals. The sentiment from Bitty Birthday was punched with the curly label punch and mounted under the dino panel. For the background I used so saffron and bashful blue DP. The blue layer is the solid that comes in the DP pack - I decided to use this for a little less weight, although now I'm wondering if I would like the stripe better. Oh well... For embellishments I added celery poly-twill ribbon, a Sherbet button tied with hemp twine, and a chipboard 6 that I covered with the same saffron dot paper and sanded. 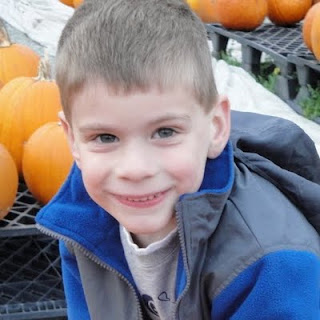 Happy (early) birthday to my favorite boy!
Posted by Lori Rider at 4:20 PM

Your card is wonderful - I love your color choices and how you used the sketch to fit your vision. Great job and I know your son will love it!
Thanks so much for playing along this week!

This card is just adorable. I love everything about it. Great job!!! I'm so happy you shared this with all of us!!!

HI Lori :) I hope your little guy enjoys his Birthday!

HI Lori :) I hope your little guy enjoys his Birthday!

This is fantastic. Wish we had more dinosaurs! Gorgeous!

completely adorable. Your card is terrific. Love what you've done with the sketch. The colors are perfect!

Thanks for playing along this week

darling, darling card and such attention to detail! Just fabulous! Great job with this week's Sketch challenge. Thanks so much for playing along with the Stamping 411 Operators! Keep up the good work! Blessings, Gretchen

OMG!!! I just LOVE this card and how you turned our sketch!! Great job and I am positive your son will love his birthday card!!! This is one of my all time fav stamp sets and have it too in my stash!! Thanks for playing along with us this week over at Stamping 411!!

Super cute! Perfect colors. Congrats on being chosen for the Stampers Showcase!

What a sweet card for a sweet little boy! Congrats on being a 411 pick, too!

Love your card - great color choices . . . isn't it great how these sketches inspire us! TFS!
Kay