Wow, I can't believe this challenge is halfway over. It's going by too quickly - that means I have less and less time to get ready for next weekend's events! I think I should probably clarify one little thing - I'm not attempting to incorporate the Christmas carol "The Twelve Days of Christmas" into my cards. ;) There have been some interesting coincidences, like the gold on Day 5, or elements of two and three on those days, but it hasn't been intentional! Connecting my cards to the song didn't even occur to me, LOL. But I will say the song has been running through my head all day! 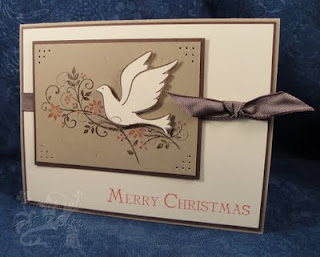 Well, anyway... Here is today's card. I found a great inspiration piece on the Jonathan Adler web site for the inspiration challenge on SCS: the utopia bird vase. I translated this into a card using very vanilla, kraft, chocolate chip and ruby red with the Gifts of Christmas stamp set. I really wanted to stick to clean and simple today - hence the wide vanilla border and the large central image panel. I colored the image with markers because I wanted to stamp a different sentiment onto the base of the card, and while I was at it I went ahead and colored the flowers ruby red and the rest chocolate chip. This was pretty fussy coloring but I think it was worth it. I also stamped the dove a second time on vanilla, cut it out and popped it up. The sentiment is from Many Merry Messages. I did use some chocolate chip taffeta ribbon and piercing on this card since I have done very little embellishing on these Christmas cards so far, but I think this could easily be a nice SIP (stamps, ink, paper) card for the workshop folks. We'll see. Like I said the other day, I'm too indecisive to say for sure right now!
Posted by Lori Rider at 2:01 PM

I love the dove. The flowers are soft. Beautiful.
Sharon L

Lori, love your layout and color combo! The dove really sets this one off well.

Lori--You are doing great on these! I just got that set--isn't it lovely!
Nola

I love how the dove really pops off the page, and the flowers in that set are so delicate. I pair chocolate chip with almost everything, but I don't think I would have put it with red if I hadn't seen it first. You did a great job putting this one together.

wonderful card. love the layout and colours. the poped up dove is perfect.

Gorgeous card. I like the neutral colors and the layering. The dove just pops.
JoAnn (scrappingnana4@yahoo.com)