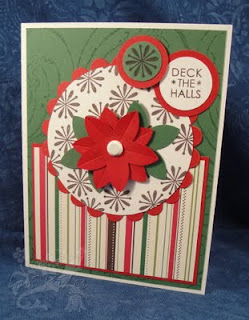 This was a toughie today... I had a hard time finding a challenge that was suitable and not a whole lot of time! Finally I happened on the Viva la Verve sketch challenge and I decided I could make that work. It was also a limited supply challenge, and it wasn't easy, but I did it! The limits were one (type of) embellishment, two cardstock colors (plus a neutral), and three stamps.

I'd seen a swap card at the Portland regional that used the five petal punch to make a poinsettia. I've since seen the idea elsewhere, so I think it's caught on! I decided to try it on today's card. I punched two real red flowers and two garden green flowers, then on the red ones I scored each petal, folded them in half a little for dimension, and sponged real red ink on the edges. I put the red flowers together with a very vanilla 5/16" brad and then added the "leaf" flowers behind them.

The largest circle is made with Stampin' Up! products - but not what you might think. The large scallop circle comes from the scallop circle #2 die; the inside circle is traced from a chipboard circle and cut out. Inside the vanilla circle I stamped the snowflake from Delightful Decorations several times with chocolate chip. The sentiment is from the large block stamp in Season of Joy, and for my third stamp I used the French Filigree background with garden green ink and cardstock. The designer paper is from Merry Moments.

Gotta run... I'm just in time for the bus dropoff! Whew, I'm glad that came together quickly! Thanks for visiting, and don't forget to leave a comment so you can enter to win the surprise Christmas blog candy that I'll give to one person who commented sometime during my Twelve Days of Christmas challenge!
Posted by Lori Rider at 3:14 PM

I recently got the circle and scallop circle dies, they fit perfectly together-so fun! I love all the layers on this card, and the combination of stamps. TFS

Yikes ... now I need the circle die to go with the scallop! This is just gorgeous! I love layering! Thanks for sharing!

This card is so "homey". I flash back to a long time ago.
Sharon L

Good thinking to only use part of the sentiment to get "Deck the Halls." Nothing like traditional red and green to get one in the holiday spirit!

Very pretty card. I have been wanting to try this star flower for a poinsettia also. Nice job.
JoAnn