What a doozy of a cold

This cold I caught... it was rough! I'm starting to feel better, so I guess it wasn't that many days of being really sick, but it felt awful while I was suffering with it. Maybe just because it was the first cold of the season?

I finally felt well enough to do a challenge card for the featured stamper challenge today. Our stamper is Terry (Terrore3) and wow, she has a huge and amazing gallery! I picked this card to CASE - although it might not look much like it! I hadn't intended to stray this much from Terry's lovely card, but things kept happening. You know how that goes... 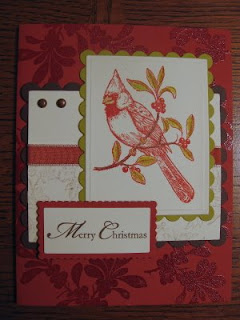 OK, anyway. Since Terry's card has a bird, I decided to break out my new set from the mini called A Cardinal Christmas. This is a little different style of stamp for me and it's really lovely. I stamped the cardinal with riding hood red on very vanilla cardstock, then using a blender pen and kiwi kiss and chocolate chip ink, I colored in the stems and leaves to add a little more color.

I wanted to try Terry's mixed background so I took the Bella Toile stamp and inked it with chocolate chip really well, then stamped off once before stamping onto a sheet of vanilla cardstock that I partially masked off. I trimmed it down and added a strip of riding hood red taffeta ribbon to hide the edge of the toile.

The sentiment is from the same set, stamped in chocolate chip on vanilla. I used rectangle Nestabilities (regular and long) for all three panels.

The card base is riding hood red with the silhouette stamp from the same set embossed with Versamark and clear EP. Before glueing everything down I added two Making Memories copper brads. I think this ended up being a very elegant Christmas card, and congrats to Terry for being the featured stamper and providing the inspiration!
Posted by Lori Rider at 4:03 PM

LOVE this card! I commented on SCS but am so glad I came to your blog for a closer look and extra info! The bg is gorgeous ... deep rich colors make for such a festive holiday card!! Hope you are feeling even better today!! TFS