We lived to tell about it!

Today was a first at our house - a birthday party with a whole lot of other kids. This was the first year that Ben expressed interest in inviting kids from school. We went whole hog and invited the whole class (19 other kids) plus two from our neighborhood. In the end we had 9 kids come, and that was plenty, LOL. I think they had a good time.

We decided to do a mad science party. Having a science demo expert in the house helped a lot. Todd did a great job of holding the kids' attention, even in the face of a few little boys who were on the rowdy side. Thankfully, nothing got broken or damaged! Here is a sampling of the festivities for you. 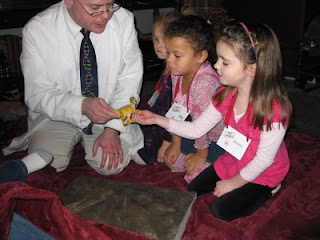 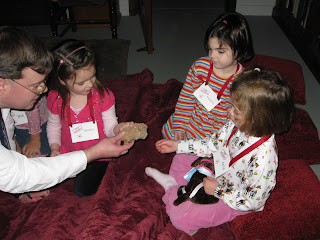 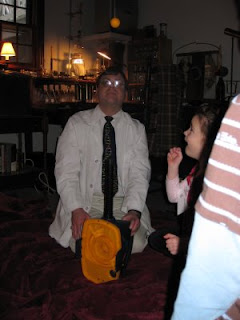 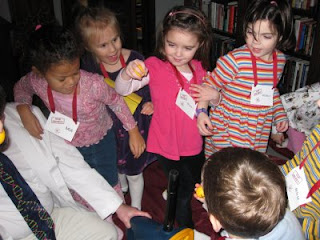 Filling beakers with "magic" colored water (the food coloring was placed in them ahead of time - they were totally fooled!) 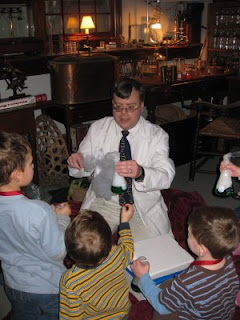 Then adding dry ice to the beakers - the kids' favorite part! 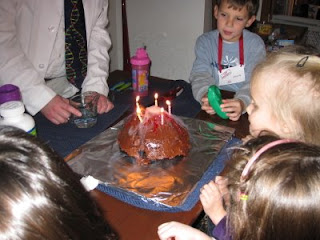 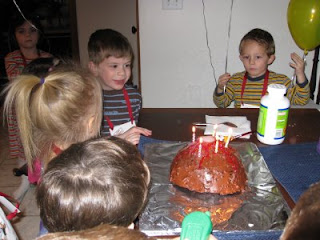 Here is my cake effort for this year - after much indecision I went with a volcano cake. It's a regular cake mix baked in my Kitchen-Aid mixing bowl. It took more than an hour to bake, but it did finally get done. It might have looked better if I'd used two cake mixes. Anyway, before I frosted it I put a small vase down into the top of the "volcano" to be filled with hot water and dry ice. I only put the vase about halfway in and then filled in around with frosting to make more of a point to the mouth of the volcano. The lava is red and orange gel icing. I thought it turned out pretty well, and it really wasn't hard. The kids seemed to get a kick out of it - and it tasted good, too! 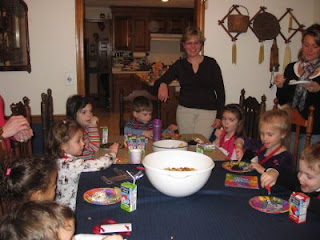 It's amazing how quiet 10 kids can be when you fill their mouths with cake and ice cream.

I just have to share one funny story related to the party. This actually happened on Friday when one of the class moms told me that her daughter couldn't come to the party. This particular girl was someone whom Ben really wanted to be there, so I was afraid he'd be awfully disappointed. He looked a little sad at first, then he grinned his Ben grin and said, "She won't know what she's missing!" That's a good attitude, my boy. I hope you can keep that outlook through your whole life!
Posted by Lori Rider at 6:04 PM

Lori and Todd! A wonderful success! Does Dr. Science do parties for hire? I know some other boys who would love this party. :) Congrats from Trudy and Mike!