I had to make time to play the featured stamper challenge today. Beth chose Diane (a.k.a. Lost in the '60s) and I love her work, and often see her sweet comments on others' cards - including mine!

I picked this card - which happens to be her most recent upload. And I purposely didn't look at the challenge gallery before making my card, because I have a feeling this one is going to be a popular choice! I changed the image and sentiment, and I kept the soft sky and basic black from Diane's card but left off the kraft. 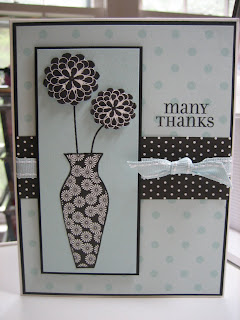 I started my card with the vase, which is by Great Impressions. The paper is from a Target pack by Making Memories, and I actually used the thumbnail of this print from the back of the packaging - the actual paper has a much larger print, but I wanted the tiny flowers here. The stamp has a pattern on the vase, but I didn't want that to show so I inked the outline of the vase with my basic black marker.

I stamped the flowers (Savvy Stamps) twice in black ink: once on soft sky cardstock and once on white. Then I cut just the flower parts from the white image and added to the soft sky image with dimensionals.

For the sentiment, I took the stamp from Lots of Thoughts and covered the bottom of the image with a post-it, then inked the top, removed the post-it, and stamped on the background. I tried it with a marker but it just wasn't bold enough.

I decided to keep this one crisp and clean, with some black layers and a white card. Maybe in the coming days I'll have time to do a two-hour card, but not today!
Posted by Lori Rider at 3:52 PM

Fabulous card ... love the dimension on your bloom ... and what a great idea to ink only the outline of the vase with a marker.