What a difference a weekend makes

I'm feeling so much better after yesterday's SCS inspiration challenge - I was overwhelmed (in a good way!) by the positive response to the challenge. I really wanted to pick something that everyone would love, and it seems they really did! Thanks to everyone who has played, and keep 'em coming! I'm trying to stay caught up in commenting on everyone's cards, since I loved seeing all the different takes on the challenge. But I have a newfound appreciation for the effort Stephanie makes to do that every Saturday!

Today I managed to squeeze in a little time to do the featured stamper challenge. Today's stamper was Chelemom - I think she is new to me, but I enjoyed seeing her gallery. Congrats Michele! I picked this card to CASE - although I think I ended up changing quite a bit! 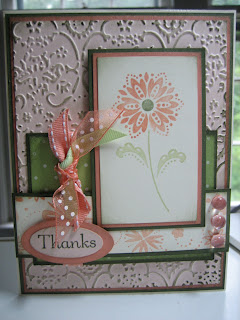 I wanted to keep the Cuttlebug embossing, since I'm new to the CB and haven't used it yet on a card. But since I'm new I only have a couple folders, so I chose the textile texture. I intended to keep the layout the same but ended up changing it a bit to work with my images. I totally changed the colors, obviously, but used a similar ribbon treatment and kept the sponged edges on all the panels. Actually the entire CB panel is sponged, since when I did the edges the contrast was pretty strong so I went over the whole thing lightly. Not sure if that was the right thing to do, but it's done now!

I decided to use very vanilla, blush blossom, groovy guava, certainly celery and always artichoke for my colors. I did the CB embossing on blush cardstock and set it aside. For the large panel I decided to use a piece of celery dot paper, and for the horizontal strip I used the It's Beautiful wheel. I inked it with guava and then rolled off some to get a lighter color. I sponged everything with artichoke and layered onto artichoke cardstock, with an extra guava panel behind the CB layer. The flower from True Friend was colored with celery and artichoke marker, and a guava "marker" made from a blender pen and a reinker.

For final touches I took the "Thanks" stamp from Live Your Dream and stamped with artichoke ink on blush cardstock, then punched blush and guava ovals. The dewdrops (from Michael's) are clear but I punched a 1/4" circle of guava and adhered to the back with Crystal Effects so they would stand out.

When I assembled the card, I decided to put the ribbon on the larger celery panel instead of the strip. I tied a knot with guava ribbon, then added just a knot of celery grosgrain and a dot ribbon that matches the guava really well. It was from my LSS - I don't know who made it. The celery panel is mounted flat, then the wheeled panel is up on foam tape. The flower is on foam tape at the top but flat adhesive over the wheeled panel. The sentiment is on dimensionals.

This was a fun one - I'm sure I'll be doing more CB cards in the future!
Posted by Lori Rider at 2:02 PM

Thanks again for guest hosting ... the gallery is fabulous and participation was wonderful.

I love how you sponged the background ... It really highlights the texture of the emobossing ... the triple ribbon is fun too ... wonderful card.

Ooooo, I love everything about this card! My cuttlebug has become my new friend, although I fear I may use it too much...is that possible? Anyway, just a beautiful card! - susan :-)