I chose this print for the challenge this week because the fleurs de lis in the lower left corner reminded me of Carte Postale. It's one of my favorite stamp sets, and it's on the retired list (sniff, sniff) so as of August 11 it will no longer be available. I think it's one of those sets that I will never part with. Anyway, the print is by Carol Robinson and it's available at art.com. 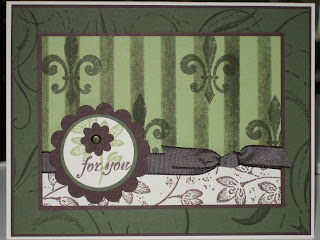 I wanted to reproduce some of the different textures from the print on my card. I thought the (presumably retiring) Leaves a la Carte wheel would be perfect for the small strip of cardstock specified on the sketch. I inked the wheel with my chocolate chip ink pad and rolled it on vanilla cardstock. The French Flair background (which is of course also retiring) was a natural choice for the large panel, and I stamped in artichoke on artichoke cardstock.

The striped panel was the most involved. I took a piece of celery cardstock and used two large post-its to mask off and make a stripe, which I did with a paper towel and artichoke ink. Then I repositioned the post-its (just eyeballing it) to make more stripes. Finally I used the fleur de lis stamp and my Stamp-a-ma-Jig to add the pattern. I put the leaf panel and the striped panel together onto a chocolate chip layer and then added chocolate chip taffeta ribbon.

For the sentiment I stamped the leaf image in celery on vanilla cardstock and then added the sentiment from Fresh Cuts. I wanted a flower on there somewhere, so I punched the smallest flower from the Boho Blossoms punch and used a vintage brad in the center, then used the 1 1/4", 1 3/8" and scallop punches and mounted on dimensionals.

Please come and play along - I'd love to see what this piece inspires you to create. The SCS keyword for uploading this week is DSIC25. Thanks for visiting!
Posted by Lori Rider at 10:47 AM