Man, I am soooo tired from staying up too late last night! But I'm still humming the songs from Enchanted all day today. Now, moving on...

Today's featured stamper is Maren (aka mmbc) - Beth says maybe we haven't noticed her yet, but I have! Her gallery is lovely. I chose this card for my CASE, and unlike my usual method, I made some significant changes. The main thing was that this was one of Beate's sketch challenges originally, so I changed the layout a little by making the floral background three pieces instead of four and offsetting the division between the top two small panels, and I also reoriented the focal panel. I changed the stamps, the ribbon placement, and the colors - I kept the chocolate chip, since I did originally intend to use the same yummy satin ribbon, but didn't in the end. I liked the idea of blue and green and used bashful blue and mellow moss. 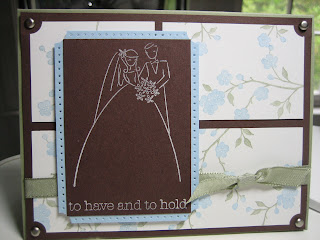 My main panel is quite different from Maren's - I thought it might be fun to see what it looked like with white stamped on chocolate chip instead of the other way around. What do you think? The couple and sentiment are my beloved To Have and To Hold set. I had intended to do my brads and corners just like Maren, but I cut the panel so close to the words that there wasn't room. So I rounded the corners on the underneath blue layer instead, which I think looks kinda cool, and added some piercing since I wasn't doing any paper piecing like Maren did.

The background is the Garden Silhouettes flower stamp colored with bashful blue and mellow moss markers. I stamped it several times on whisper white to get a nice allover print but still leaving some white space. I wanted to add brads so I did the ticket corner treatment on these corners instead.

When it came to the ribbon, I decided that the chocolate chip ribbon would just make that color overpowering, so I used moss taffeta ribbon to bring in more of that color, plus a moss card base. Thanks for dropping by today - I'll catch you later because I need a nap!
Posted by Lori Rider at 3:05 PM