I don't even know where to begin!

Wow, I never would have thought I would go for almost 3 months without posting on my blog. I hope that it doesn't happen again! Lots has been going on that had little to do with stamping... I'm still doing TMJ treatments and I'm feeling better but still not singing. So - hanging in there and hoping for the best. The kids are almost done with school and then they'll only have a couple days off before heading into summer camp - I'm sure the months will continue to fly by. I've been editing up a storm - got in a little over my head and now I'm ready for a break. I've also started making jewelry, which has been really fun. I knew it was a slippery slope and I think that's why I avoided learning how to do it for so long... but it's too late now! LOL!

Anyway - back to stamping. I haven't forgotten about my stamps but they've definitely taken a back seat for the past while. I'm realizing that I really want to get back into doing challenges (including the OCC, but probably not this weekend) and posting here. I've also signed up for a craft fair in September so I'll need to be making some cards to sell, right?

I got a little boost this week when a very nice neighbor requested four cards for specific people and occasions. I thought I would share the first one - especially since it uses some goodies from the brand-new catalog that just started last week! The request was a for a sympathy card using rust, with an earthy look. This is what I came up with - hope she likes it. The layout comes from a sketch blog I don't think I've played along with before: Freshly Made Sketches. 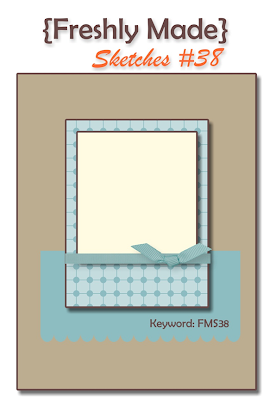 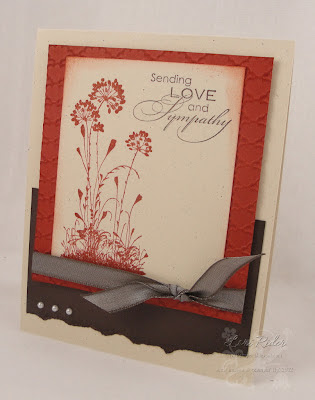 The new image I've featured here is from the stamp set Serene Silhouettes. I used Cajun Craze for the main color with accents of Early Espresso, on the naturals ivory card stock. The sentiment comes from the set Love & Sympathy (not new, but the first time I've used it). In the background I added a panel embossed with the new fancy fan folder, and although I tried a million border punches for the espresso piece, nothing looked right and in the end I thought tearing would give me that earthy feel I was going for. I sponged all the edges and then added espresso taffeta ribbon and three little pearls for embellishments.

So, now that I've broken the ice, I'm really going to try to post more often. I'm looking forward to getting back into the groove. Thanks for visiting, have a great weekend, and hope to see you again soon!
Posted by Lori Rider at 9:46 AM

This is a BEAUTIFUL card!

The mix of colors work well together. I love the new embossing folder! Welcome back to stamping. I stay far away from jewelery making.......I think I would be forever lost in beads, as I am paper now! Thanks for playing with us at Freshly Made Sketches.

So glad to see you are back! Your card is beautiful - love seeing the new stuff - the colors you used are so pretty!

So glad to see you are back! Your card is beautiful - love seeing the new stuff - the colors you used are so pretty!

Hi Lori! Love, love your card! It definitely has a serene, earthy feel. I think tearing the paper was the perfect choice and the ribbon and bling bring a lovely elegance as well. I am sure your neighbor will love this card. So far, I have been able to avoid making jewelry but I totally understand the slippery slope; maybe after I retire I might take up quilting, but no way right now. Nice to see you at Freshly Made Sketches!

Wow! This card is beautiful! it is so warm and fitting for such a sad occasion. Love the colour combination.
Thanks for joining us this week at Freshly Made Sketches!

What a great card Lori, I love the texture you have created and love the new products!
So nice to see you again and glad you are back stamping!!!

So soft and elegant! I just love your color choice and all of the attention to detail you've included. Just lovely!