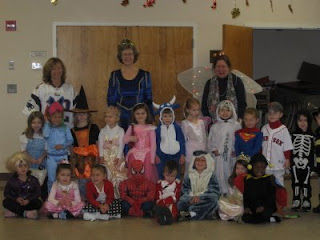 We had a fun day today. Ben's day at preschool started with the annual costume parade. Here is his whole class all decked out. They were all so cute! Ben chose this blue monster costume a while back - he was originally asking for an alligator, which we couldn't find, but he saw this one online and decided that was the one. 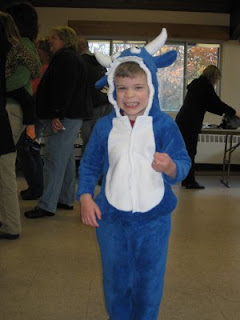 Our neighborhood has had a real explosion of young families in the past couple years. The last time we gave out candy for trick-or-treaters was two Halloweens ago, and I think we had five or six kids come. Tonight one family hosted a party for everyone, and there were probably ten families there with 25-30 kids! It was great fun. We got a group photo for once - Todd was dressed as a mad scientist (an annual tradition) and Sarah was a bat. She took a little convincing to get into the costume but once she saw Ben putting his on she was fine. 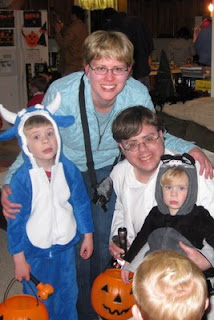 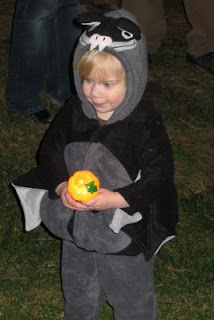 We were out for about an hour and the kids did really well. Ben pronounced over and over how much he loved trick-or-treating. Sarah held a flashlight in one hand and my hand in the other the whole time. We had to walk a lot between houses since our lots are about an acre each and some have loooong driveways. At one point I asked Sarah if she was doing okay and she said, "Yes. I'm feeling good." She cracks me up!
Posted by Lori Rider at 10:27 PM

Greetings, Lori! (: Cute pix! (: Did you get a new hairstyle? I really like whatever you did to it in your family pic! (: