This computer problem is driving me crazy, and so is the laptop! According to the computer place, my hard drive crash was a really bad one, and they're not sure how much they can save. I can't believe I might lose so much stuff. I can't even bear to think about it.

Yesterday I started working on the SCS technique challenge. I don't usually do these challenges, for various reasons... but it was a gift card holder yesterday and I'd been wanting to make some for the fair, so it seemed like a perfect opportunity. It took me till this morning to finish them up. I actually made several different ones, but I'll only show my two favorites here. 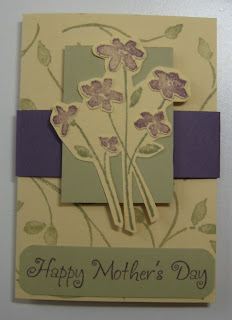 I made all of mine using my jumbo wheels, as one of the tutorials linked on SCS showed. This one uses the Watercolor Vines wheel in mellow moss on barely banana cardstock; I used the wheel on both sides of the cardstock before folding. I liked the belly band technique for keeping them closed - the band is 1" wide and held closed with a glue dot. It just slides off to open the card holder. The bouquet is from Close as a Memory; I stamped it first in mellow moss and then in perfect plum, and cut out some of the purple flowers and glued onto the moss image. The sentiment is by Inkadinkado. 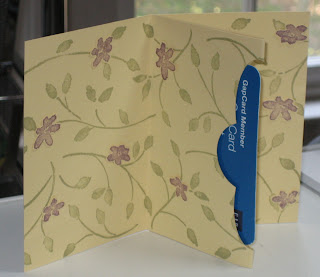 Here is how the inside looks. I borrowed an idea from the catalog and added some cutout plum flowers to the vines. For punching the opening for the gift card, I didn't have the word window punch that the tutorials were using, so I used my large oval punch and then my 1 1/4" circle punch. I think it looks pretty this way! 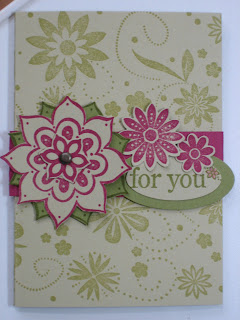 The second one I'll show you is the It's Beautiful wheel inked with old olive on river rock cardstock. I was doing a lot of these and so constrained myself to using the ink cartridges that I have instead of the ink pads, so that limited my color choices. I paired it with the One of a Kind set. I stamped the large flower once in olive on olive cardstock, and once in pomegranate on river rock cardstock, then cut out both and layered with one of the flowers that goes with the Boho Blossoms punch and a brass vintage brad. The sentiment is in olive on river rock, with a little pomegranate colored on the tiny flower and the remaining punched flowers over the oval punches. On the inside I added a few more pomegranate flowers to punch up the color. 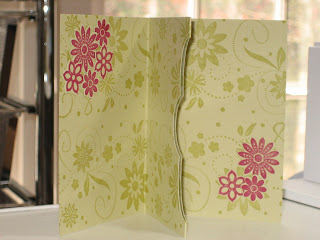 I really enjoyed making these - they go pretty quickly, and I'll definitely be making more. Tip of the Day: If you want an envelope to go with these, SU sells notecards that come with envelopes that are the perfect size (3 5/8" x 5 1/8"). However, you may be lucky like me and have a leftover stash of envelopes from your wedding thank-you notes - they are this same size and I have a ton of them! Speaking of weddings, I should probably make a couple of these that are wedding-themed... maybe this afternoon!
Posted by Lori Rider at 12:41 PM