Trial and error, and more trial, and...

Well. I wanted to do Jen's Sketch for You to Try today to make a wedding card. But when I got all the elements together, the sketch didn't really work. So I went in my own direction with the layout so that I could still use what I'd already done. I did complete another challenge, though: Sharon's Stamp Simply challenge to use glitter. I really had some fun with that aspect of this card! 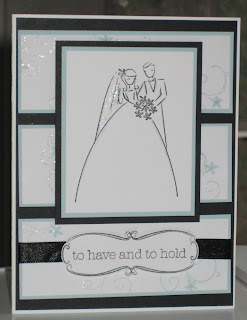 The first thing I did was the center panel. I stamped the couple from To Have and To Hold in basic black on whisper white cardstock. Then using my soft sky reinker and a blender pen, I added a touch of color to the image, highlighting some of the lines and coloring in the flowers and bow tie. For glitter I used stardust Stickles on the veil and flowers. Somewhere in my blog browsing recently I read the tip to put a dollop of Stickles on a scrap and use a little piece of paper to paint wherever you want the Stickles to be. So whoever gave that awesome tip, thank you! It allowed me to put just a dot of sparkle in the center of each flower.

While that dried I worked on the background. I guess you could say I made my own designer paper again - I did say yesterday that I love doing that, right? I took the small flower stamp from the same set and stamped all over a white panel with soft sky. Then, as long as I had the blender pen inked up, I colored in the flowers so there would be a bit more color. I went over all the swirls with my Sakura clear glitter pen and dabbed Stickles in the centers of these flowers as well.

The sentiment (from the same set) was stamped in black and the frame added with the Stamp-a-ma-Jig. I did more blender pen coloring inside the frame and added just a bit more glitter pen. The subtle sparkle is just enough, I think!

It was when I went to put it all together that things fell apart. No matter what I did, it just didn't come together. So I turned the strips the opposite way, which gave me lots more room to showcase the image and put the sentiment underneath. The sentiment and couple are both on dimensionals, and behind the sentiment I put a strip of black satin ribbon. Not sure I made the right choice there, but it's done now!
Posted by Lori Rider at 2:12 PM

First, hello from a lurker! I go by "HaggisHead" on SCS. I think this card is beautiful, and that the black ribbon goes very nicely. I'm attending a bridal shower next month and a wedding in June, and want to make cards for both in the wedding party's colors, which are peach and ivory. I'm sincerely thinking of doing a CASE of your card in those colors for the wedding card. TFS :-)