We are home from our trip and we had a good weekend - but not without its challenges. Here's a short recap:

Friday was spent visiting two large used book stores (for Todd) and one small but densely packed stamp store (I think you know who that was for!). I promised that I would only get things I'd never seen elsewhere since we are trying to keep spending to a minimum. They had some great things for Mother's Day, Father's Day, and graduation cards, so I supplemented my collection in those areas. And I couldn't resist picking up two of the Cornish Heritage Farms backgrounder stamps - I'd never seen them in person before, and this store had a whole bunch. It was Stamping Memories in Laconia NH - if you pass through, be sure to stop, because it's amazing! 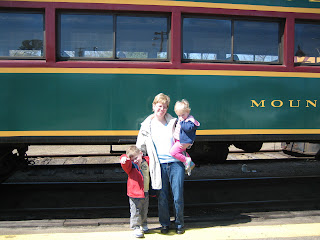 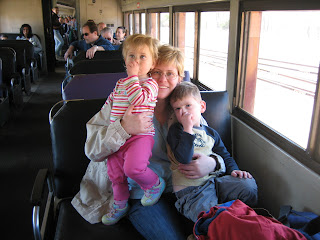 Saturday our first activity was the Conway Scenic Railroad. Unfortunately we were a little disappointed - the scenery was pretty, but we thought we were going to go up in the mountains more, and the train was not as old as we were expecting. Sarah was not too happy to be semi-confined to the train seat, and she also was very tired by the end, which overlapped her usual naptime. Ben liked the train ride. But when asked later what his favorite part of the day was, I was a bit dismayed - but not terribly surprised - that it was the elevator ride at the LL Bean outlet!

Our time at the outlets was rather brief since Sarah fell asleep as soon as we were in the car. I thought the best part of the day was an impromptu stop at a park, where the kids happily played. Sarah likes the swings the best right now. The kids sat together on the teeter-totter (with a girl of about 10 on the other side!) and did that for quite a while. Sarah wanted to keep "bouncing" all day and screamed when it was time to go! 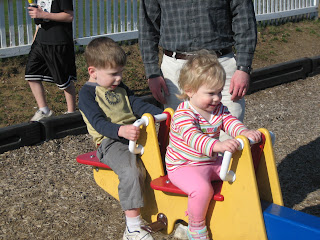 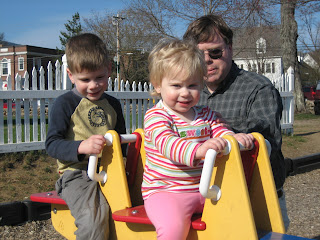 Today we pretty much headed for home, but stopped for a bit more outlet shopping in Freeport and Kittery, Maine. I really didn't intend for outlets to be the primary destination of our weekend! But it just kind of worked out that way. I think we learned that trips like this will be better when the kids are a bit older, especially once Sarah can sit in a restaurant without throwing a tantrum (or two, or four...) every single time. But it was still good to have some family time. Now we will have to face up to a very busy week ahead - my "baby" turns two, lots of relatives are coming to visit, and of course I'm still getting ready for the May 7 fair. Yikes!
Posted by Lori Rider at 8:40 PM