I really get frustrated by my schedule at the end of the week sometimes. It's so hard to find any stamping time, especially since I'm supposed to be meditating for an hour a day! 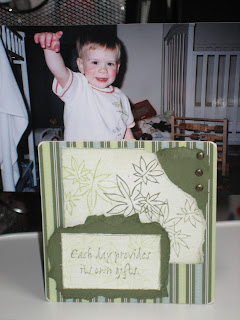 I did have an assignment for this week, though. I was in charge of bringing the make and take to our team meeting, which was last night. We usually don't do cards, so I wanted to find something else fun that was also fairly quick and easy. I saw a cute photo holder made with chipboard coasters on someone's blog - I can't remember who it was, sorry! - and they linked theirs back to this one by I'mVeronica on SCS. I didn't have any directions so I just figured it out myself, and I thought I would post a little tutorial here.

1. Use the corner rounder punch to round corners of your designer paper squares.

2. Apply a thin layer of Mod Podge to the coasters. Make sure it gets all the way to the edge.

3. Adhere the paper to the coasters, smoothing out to the edge to make sure the corners don't curl up.

5. Allow to dry - if you're like me, by the time you have everything figured out to put on the front, it'll be dry!

7. Decorate as desired. I only decorated the front of mine but you can do both sides if you wish.

Here is my recipe for my photo holder. I have way too much of the retired Wintergreen paper, so I chose one of those prints. I thought I might give it to Todd for his desk, until he informed me that he didn't like the stripes, LOL!

I used the Artfully Asian stamp set and the Linen background. The first thing I did was stamp the linen in certainly celery on whisper white cardstock. I experimented with varying amounts of pressure and generation stamping to see what level of intensity of color I would get. I think I ended up just using the first-generation stamp, though.

The leaves were inked in both celery and artichoke. I played again with some generation stamping over the background. The final image I used has three of the leaf images, one in celery and two in artichoke (first and second generation). I tore out the assymetrical panel, used my fingernail to distress the straight edges, and inked all the edges with artichoke.

The sentiment also has the leaf stamp over the linen background. This is a second-generation stamp in celery. I inked up the sentiment three words at a time and centered the second half under the first so that it would fit on the coaster. Honestly I can't believe I only had to do this once! The edges are similarly distressed and inked, and I mounted it on an artichoke panel with torn and inked edges.

When I went to put it all together it just seemed like that upper right corner needed something else. So I added another torn and inked artichoke piece with three vintage brads. My teammates liked it - it was something kind of different, I guess! I finished off by mounting it to the coaster and then popping up the sentiment panel on dimensionals.

I think I'll be making some of these for the Mother's Day fair - we'll see how they do. I ordered a whole bunch of coasters so I'm sure you'll be seeing them on other projects for a very, very long time!
Posted by Lori Rider at 6:55 AM

Labels: Anything But a Card, tutorial

Hi! I wanted to let you know that I referenced your blog in a project I posted on SCS. I sure enjoyed making this photo folder and I know others will enjoy it too! Thanks so much for the tutorial!