Two cards are better than one...

especially when you're getting ready for a fair!

I'd seen a card using Ranger alcohol inks and glossy cardstock on this blog a while back, and wanted to try it. You already know I love alcohol inks for making my dominos, but I'd never used them on a card. If you haven't tried alcohol inks, you should! They are so much fun and totally addictive.

I liked Diane's simple layout so I decided to CASE her card to some degree. I ended up with two cards that are pretty much the same - just a different flower stamp and color scheme. I did mine a little differently than Diane did, though, so here are the steps I followed.

Diane said that she stamped first on glossy white cardstock in black ink and then added the alcohol inks over top. Well, I'm not sure what I did, but it didn't work for me. I tried both Stazon and basic black inks and both of them bled when I added the alcohol ink. After some experimentation, I did the alcohol background first, then let dry for a few hours - I really wanted to be sure it was dry! Then when I stamped with the basic black ink and again let it dry for a while, it worked.

My first card uses the same combination of alcohol inks as Diane's card: red pepper, raisin, and meadow, dotted onto the felt applicator and then onto the cardstock until I had the area covered. I used very little of the meadow and a lot of blending solution to get it looking this light and pink. The second card uses the same technique with eggplant, denim, and meadow inks. The stamps are by Memory Box (flowers in vase) and Inkadinkado (tulips).

Tip of the Day: I found that when stamping on the glossy cardstock, I needed less pressure than I use in my stamping normally. It seemed unusually easy to press too hard and get a blurry image, so I recommend a light touch.

To finish my cards I used my Marvy oval punches. Both cards use perfect plum, along with pretty in pink and bashful blue. I chose the same dot paper from the hostess prints pack for the background, and stamped the Inkadinkado sentiment in black onto the paper. For the ribbons I used the stacked ribbon technique that had been featured in Monday's challenge, with wide white organdy and the pink and blue SU taffeta ribbons. I mounted the ovals on dimensionals and that was it! I kept it simple so the pretty backgrounds would be able to shine. Here are close-up photos of the alcohol ink images: 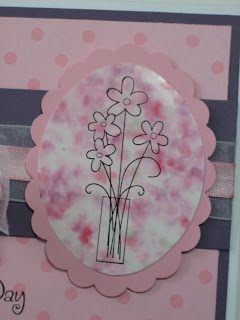 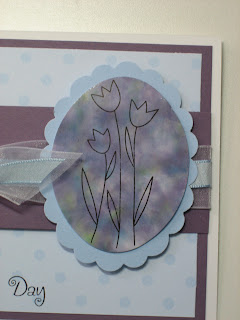