A Window for Mom 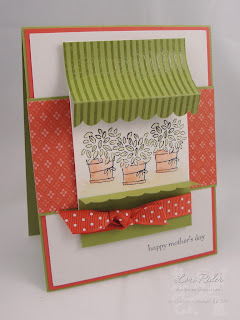 Happy Mother's Day to all the moms out there! I've had this card made for a while - we did it at my last club - but I didn't want to show it until now because I wanted it to be a surprise for a special mother out there. I love you, Mom!

I had seen this adorable window card and decided to take the concept and adapt it for my card. I used the stamp set Bouquet Bunch, which is available in the new summer mini, and watercolored it with really rust, old olive, and creamy caramel watercolor crayons. The awning was embossed with the Solid Stripes a la carte stamp (which was in the Occasions mini) and I used the scallop edge punch for the edges of the awning and window sill. 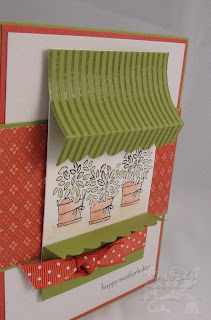 Here's a close-up of the window. I rolled the awning gently around a large marker. The embossing did crack a teeny bit, but that just gives it an aged look, right? ;) After the watercoloring was finished I decided that dusty durango would look good with these colors, which gave me ribbon and designer paper to dress up the card. I added a sentiment from Teeny Tiny Wishes on a background panel of naturals white cardstock and that was it - sweet and not too complicated!
Posted by Lori Rider at 1:00 PM

This is absolutely amazing! I love it! I wish I had a bit of your talent. your work is beautiful!

This is a very beautiful card! I like the idea of the window! Something new!

This is beautiful - what a great design!