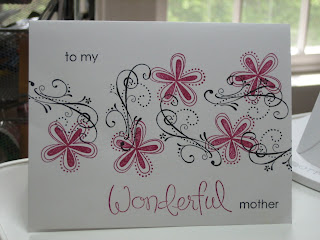 Why do I feel like this card needs a daily affirmation? I never make single-layer cards - maybe that's why!

This is the card I'll use for my make & take at the Saturday fund-raiser event. Initially I wasn't going to have it be a single layer but rather stamp on white, layer with the contrast color, and then put onto a white card. But when I mocked up one that way, it really didn't look any better than this one, and by making it a single layer, my prep work is all done!

I like several things about this card for the M&T. I can bring a few different inks so people can choose their contrast color. I got the Wonderful Favorites set just for this occasion because this way people can make a card for a grandmother, sister, daughter, or friend, and it doesn't even have to be for Mother's Day. I hope that will allow me to raise a bit more money.

As you can probably guess, this is a very simple card to make. I saw a similar one in a magazine - I think Take Ten, but I have no idea which one or whose card it was, so if it was yours, let me know! The swirls and flowers are from the Priceless set, stamped in black and pomegranate, then I used the same inks for the words, putting "wonderful" in pomegranate so it would stand out. And that's it! I hope it's a hit on Saturday. I would love to be able to make a nice contribution to the Relay for Life at the end of the event!
Posted by Lori Rider at 3:10 PM

This is beautiful....simple and elegant. I'm going to have to challenge myself to do a single layer card....Joan